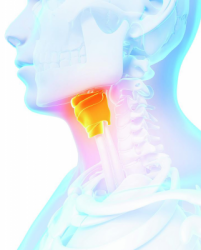 A total laryngectomy (TL) is a surgical procedure that aims at performing the definitive excision of the entire larynx. Depending on the origin of the cancer and its local extension, the excision of contiguous anatomical regions may be performed in the course of the same operation:

– Lesion at base of the tongue: total subglottic-pharyngo-laryngectomy     ♦♦♦

Total laryngectomy, irrespective the indication, is only performed in a patient who can endure a long surgery, ranging from 4 to 8h hours, depending on the lymph node surgery associated and the type of reconstruction. Therefore, it requires a careful anaesthesia evaluation, often completed by a cardiopulmonary assessment. The patients presenting serious co-morbidities that do not allow them to endure the surgery are therefore, usually rejected and oriented towards a radiation therapy and chemotherapy treatment.

Irrespective of the type of total laryngectomy, the surgery causes major anatomical changes, that will affect major functions: breathing, deglutition and speech. The acceptance of this new anatomical conformation requires a neurological condition that allows understanding the changes and significant coping skills. The patients presenting degenerative or toxic dementia are therefore usually rejected.
Within the framework of tumour indications, a total laryngectomy is only performed in patients who do not have metastases, and who have a tumour that can be excised surgically. The elements that make a tumour surgically ineradicable are primarily the invasion of the carotid axis (with a circumference greater than 180°) and the invasion of the vertebral area.

Finally, the last and most important condition is the consent of the patient, which is not systematically or easily obtained, in view of the mutilating character of the surgery. Hence, a diagnosis announcement procedure must be carried out, dedicating some time to the explanation of the benefits, risks and consequences of the surgery. At the end of this consultation, members of the team will verify that the patient has understood the surgery and accepts it.

All these elements, in addition of the tumour characteristic of the disease, make the total laryngectomy decision difficult. Therefore, this decision can only be made within the framework of a multidisciplinary consultation meeting.

Preparation and placement of the patient:

– The patient is placed in dorsal decubitus, under general anaesthesia, with orotracheal intubation,

– Insertion of urinary catheter, temperature sensor and blood pressure monitoring catheter, in view of the duration of the surgery,

– Placement of thoracic support under the shoulders of the patient to obtain cervical hyperextension.

– A U-shaped incision (called bi-mastoid) descending up to one centimetre above the supra-sternal fossa is made. This incision will allow exposing the larynx, and performing a lymph node dissection.

– The anterior musculo-cutaneous flap (including the platysma muscle) is lifted.

– The superficial cellulo-aponeurotic tissue composing the cervical VI lymph node sector is removed and sent to histology for analysis, in order to clearly expose the sub-hyoid muscles. 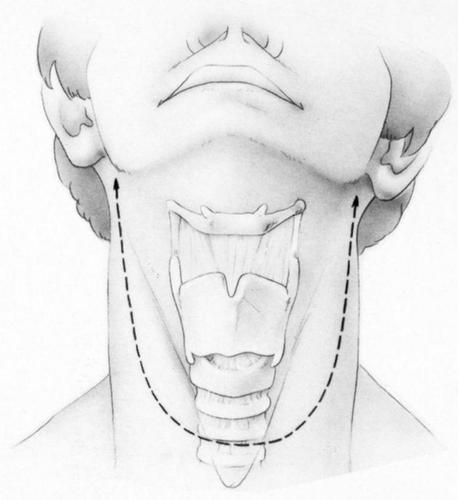 Preparation of the larynx:

– The sub-hyoid muscles are dissected and preserved if not invaded,

– We shift the larynx to the side. We look for the superior laryngeal pedicle which is ligated and then sectioned. Dissection of the lateral face of the larynx, which is separated from the carotid axis up to the pre-vertebral area.

– Same procedure on the other side,

– A thyroid isthmotomy is performed (in case of non-invasion of the gland) to allow approaching the trachea. The lobes are reflected sideways,

– Section of middle and inferior constrictor muscles of the pharynx, following the posterior edge of the thyroid cartilage to the greater horn,

– Dissection of piriform sinuses under the thyroid wings if not invaded,

– Dissection of hyoid bone and separation of muscles of the base of the tongue, exposure of the greater horn of the hyoid bone.

– Performance of tracheotomy, generally between the 3rd and 4th rings, but adapted to the sub-glottic extension,

– Opening of the larynx in the epiglottic vallecula above the hyoid bone that allows removing the pre-epiglottic space,

– The excision is continued from top to bottom,

– The epiglottis is grasped with a clamp and moved to the front, the lesion is then exposed,

– Tumour resection as desired, attempting to preserve as much hypo-pharyngeal mucosa as possible to facilitate closure,

– Dissection of inter tracheo-oesophageal area and resection of mucosa of retro-crico-arytenoid region,

– The resection is finalised by completing the tracheal incision,

– The specimen is sent to histology for examination of the resection edges, 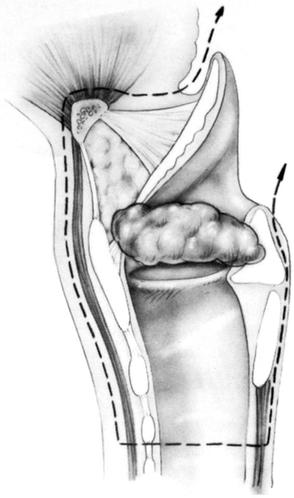 – A tracheostomy is carried out,

– Depending on the desire of the patient and of the context (preliminary radiation or not), an osteo-tracheal fistula is carried out and a phonatory prosthesis inserted.

The anatomical, functional and psychosocial consequences

The hospitalisation and the return home